In the spirit of the slew of other “Best Of” dining awards lately, I’ve decided to create my own SLCeats Best Of. Some of the items on the list are world famous, and others are what I would classify as undiscovered gems.

So, without further ado, here’s my completely arbitrary list, in no particular order.

Sandwiches
Sandwiches get prime-time coverage in my book. I love each and every one of these as if they were my own deliciously edible children. Pho Brisket Sandwich, Oh Mai. Also known as the S12, this puppy usually isn’t on their menu, but they’ll make it for you if you ask nicely. Tender, juicy bits of brisket that are slowly simmered in Pho broth are accompanied by lightly pickled onions and carrots, all surrounded by the most perfectly crispy yet soft buns imaginable. And my favorite secret weapon at Oh Mai? Ask them to put an egg on your sandwich for an extra decadent touch. I usually get mine without jalapeños. 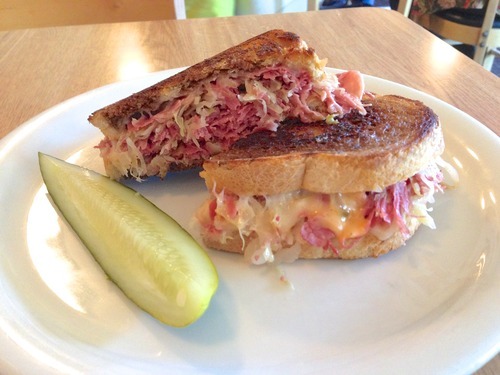 Reuben, Penny Ann’s. A bit off the beaten path, Penny Ann’s has been dishing out some of Salt Lake’s best comfort food for the past year or two. Family-owned and family-run, this is one of my favorite hangouts in the valley. Although they are best known for their breakfast offerings (get the hotcakes!), their Reuben is one of my favorite dishes in Salt Lake. Flavorful corned beef, thousand island dressing, tart sauerkraut are accompanied by perfectly griddled pieces of Rye bread. And don’t forget to add onion rings on the side.

The Caputo, Caputo’s Market. Yeah, yeah. I know. This sandwich is a bit worn out with publicity. But I tend to find that it’s for good reason. There’s something about just the right amount of bread, meats, and cheeses, slathered with a generous helping of wonderfully fruity balsamic, that make this an instant classic. Also, be on the lookout for Caputo’s Prime Rib Sandwich, which the offer as a special from time to time. It’ll clog your arteries, but you’ll hit the deck smiling.

Pork Belly Buns, Plum Alley. Do you like bacon? How about bacon steak? Because that’s my new name for pork belly. Now, imagine bacon steak gently hugged by the lightest little asian buns you’ve ever felt. No joke, it’s incredible.

Ricotta Dumplings, The Copper Onion. Delicious. If I could only eat one thing the rest of my life, it would be these. Moist, light, and seared off with brown butter and topped with lemon zest, this dish is the epitome of balance.

Bacon Wrapped Scallops, Pallet. Pallet does seafood, and they do it well. Take a large diver scallop, wrap it in deliciously thick, house-cured bacon, and sear the whole thing off and you have a deliciously decadent appetizer. Banbury Cross. I’ll put these donuts against any others in the country. Seriously. New York, I’ve had your fancy $5 dulce de leche/sea salt concoctions. Portland, I’ve had your grocery store donuts that are topped with Cap’n Crunch that people think are gourmet. But in my book, Banbury makes the best donuts around. Light and fluffy, with the perfect amount of crispy outside. My favorite is the white cake, white frosting, with rainbow sprinkles (HAS to be rainbow). Banbury’s best-kept secret? Get one of their cinnamon rolls. Completely ridiculous.

Liege Waffle, Bruges. Imitated, but yet to be duplicated, Pierre Vandamme has developed what might be the best liege waffle in the state. Pierre began by selling his waffles at the farmers’ market, and eventually moved into a cute, small space that is adjacent to the Caputo’s parking lot. Pierre has recently expanded to a second shop on Highland Drive in Sugarhouse. Waffle. Creme fraiche. Strawberries. Happiness. Chilaquiles, Red Iguana. Yes, Red Iguana doesn’t open until 11am. However, chilaquiles is traditionally a breakfast item, so I’m putting it here. Chilaquiles was initially developed as a type of casserole that used up excess tortillas from the day before. Red Iguana’s version is serious. Thick chips are doused in a perfect mole poblano sauce, house made chorizo, egg, and salsa. Oh, it also has Mexican crema and avocado, and it’s served with a side of refried beans. I think I ate about ¼ of this dish once. And I was hungry.

French Toast, Bohemian. I know many Salt Lake elites won’t venture south of 33rd, and it can stay that way for all I care. Because that means more French toast for me. Bohemian does theirs differently. The toast is breaded in some secret concoction that gives this French toast the perfect amount of crunch.

Kouing Aman, Les Madeleines. Yeah, I know. You’ve heard of this before. It’s been on the Food Network on the show The Best Thing I Ever Ate. You’ve probably even tried it. And if you have, you know exactly why this is on my list. A perfectly crisp, flaky pastry balances sweet and salty in a marvelous way. It ain’t cheap–around $5. But it’s worth every single penny. 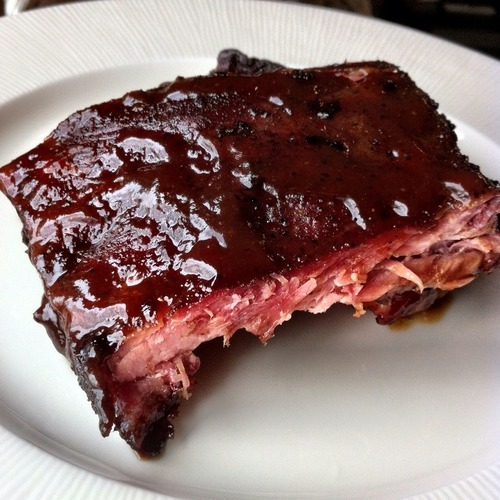 BBQ, R&R BBQ. Twins Rod and Roger Livingston have been serious competitors in the BBQ contest world, and I guess they’ve had it with people begging and pleading for them to open their own restaurant, because they’re doing it. R&R is opening up at 600 South 300 West, in the old drive-through sushi place. Their ribs are amazing. They should be opening later this month or April.

Taco Cart, El Toro. Park on 8th South and State. Proceed directly to the cart on the south side of the Sears parking lot. Do not be lured by the imitators on the other corners. El Toro is where it’s at. Get a $3 burrito that’s bigger than the $7 burritos you’ll find at the chains. And they’re happy to mix and match their meats in case you’re indecisive. Load up with fixins from the Igloo cooler at the side, then (this is important) hand your burrito back to the cook for them to wrap up. Don’t try and attempt this on your own because you suck at it and it’ll fall apart all over your lap. The quesadillas are also worthy competitors. 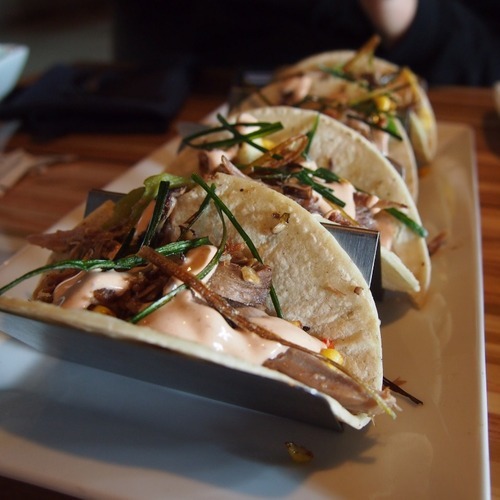 Duck Tacos, Taqueria 27. Todd Gardiner, formerly of Z’Tejas, has started his own restaurant on Foothill Drive. They do tacos, and they do them well. My favorite is the duck taco, which is duck confit, topped with delicious sauces and salsas, and wrapped up in homemade tortillas. My advice: go with a large group so you can order all of the varieties of tacos and get a taste of each.

Well, that’s it for now. I’m realizing that this is going to require multiple posts because I didn’t really cover anything that would be considered an entree. But there you have it. Part 1 of Oprah’s my favorite things in SLC. If you haven’t tried some of these, I highly recommend putting it on your to-do list.

Agree? Disagree? Have anything to add? Put them in the comments!