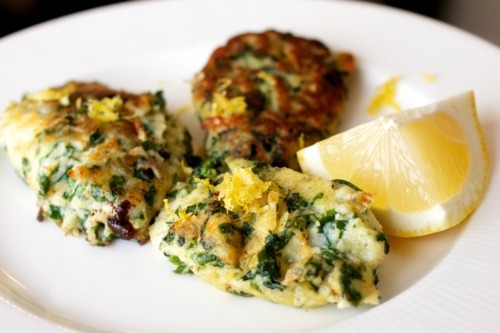 Since it was our six-year wedding anniversary today, I decided to make a dish that’s special to us. One of our favorite dishes in Salt Lake is the lemon ricotta dumplings from The Copper Onion. Just about every dish at The Copper Onion gets rave reviews, but I think this dish is the all-star, and I’ve never heard anyone say they didn’t absolutely love it.

As I said in an earlier post, one of the things I admire in Ryan Lowder is that he’s not afraid to share the recipes to his most popular dishes with the public. I can’t remember where I found this recipe (let me know if you know who initially posted it), but I’m going to repost it with a few modifications.

If you haven’t tasted these dumplings before, you need to. They are a masterwork of opposites. They are dense and moist, yet still airy and light. They have some complex, deep flavors that are counterbalanced perfectly with the addition of bright lemon citrus.

I cut the recipe in half to make it a bit more manageable for our family of two, but I’m going to post his full recipe. Our half recipe made around 12-15 dumplings so the full recipe should produce around 30 dumplings.

Blanch the spinach and squeeze as much water as possible out of it. You want it as dry as possible (I placed the spinach between two dinner plates and smashed, smashed, smashed). Finely chop the spinach. Combine all ingredients except the flour and mix well. Add the flour in small amounts and mix until just blended. Then form the dough into dumplings (I formed mine into quenelles using two large spoons. You can see how to do it by watching this Youtube video).

At this point you should have water simmering in a large pot. I made the mistake of putting my dumplings into a rolling boil and it tore them apart. So a simmer is plenty. Make sure you don’t keep them in the boiling water for much longer than 15-25 seconds because they’ll begin to disintegrate.  Once you see the dumplings start to surface to the top take them out and immediately place them in a very hot sauté pan with browned butter. Caramelize on all sides, then plate and top with the lemon zest and thyme. I like to serve them with a lemon wedge to punch up the lemon flavor even more.

Try this out and let me know what you think!