I’m a simple man that enjoys simple pleasures. Near the top of that list is a fried chicken sandwich. Confession time: I enjoy chicken sandwiches in all of their forms. Elementary school mystery patty smashed between two slices of Wonder Bread? Sign me up. Spicy Chicken from Wendy’s? I’m already there. The classic chicken sandwich from Chick fil-A? They’ve had to serve me eviction notices before.

There’s been somewhat of a resurgence of fried chicken and its many variations recently in SLC. Viet Pham opened Prettybird, an homage of the various Nashville hot chicken shops. Justin Soelberg, formerly of Avenues Proper, opened Nomad Eatery in an off-the-beaten path location near the Salt Lake airport. And Scott Evans, of Pago, Finca, and Hub and Spoke, is opening a new restaurant in the 9th and 9th neighborhood named The Birdhouse, serving (you guessed it): prime rib. Just kidding. Chicken.

So chicken’s the new hotness in town. And while Prettybird does nothing but chicken, the fried chicken at Nomad is just one of various menu items. So, loyal readers, as your humble servant I took it upon myself to visit both locations and try their respective versions of the fried chicken sandwich, and I’d like to report back on how it went.

Let’s start with Prettybird. Prettybird benefits from being founded by local celebrity chef (and Iron Chef winner) Viet Pham, formerly of Forage. This guy knows food. It is fun seeing Chef Pham transition from “fine dining” at Forage to the somewhat lowbrow concept of a fried chicken shop. But there’s nothing lowbrow about Prettybird. The tiny shop on Regent Street is clad in all-white, lending an aura of cleanliness and levity. What the place lacks in interior seating it makes up for an even greater lack of exterior seating: the patio had two small tables that fit 4-6 people total. Everything you’ve heard about the long lines and depressing lack of seating is true. A victim of their own success I guess. Get there early and plan to take your food to-go.

Nomad is such a bizarre location, located near the Jet-N-Go or whatever the name of the airport parking lot is. But you know what? It works. There’s certainly an underserved market of workers near the airport, and it’s a close enough drive from downtown that makes it worth the journey. And what it lacks in a convenient location to downtown, it makes up for in a trendy, upbeat interior. And did I mention it’s big enough that paying customers can sit down and enjoy their food? What a concept.

So Prettybird wins in the “walking distance in downtown” category, and Nomad wins in the “you pay $11 for a sandwich, you should be able to sit down and enjoy it” category. I give the nod to Nomad because of all of the pleasures available in life, sitting is right up near the top.

On to the most important part: the chicken. Both locations offer super tender, moist chicken thighs as their base. Both versions are brined and breaded in their own spice blend, then fried. I don’t know if this is going to make any sense, but it does in my head, so here goes: Prettybird’s chicken is more crunchy, and Nomad’s is more shatteringly crispy. I really liked both, but preferred the crispyness of Nomad’s version. But you can’t go wrong with either, as they are both mind-numbingly excellent.

Prettybird’s version is topped with house-made pickles, cider slaw, and their Prettybird sauce. You can get it seasoned with your heat preference: everything from mild all of the way up to a version that will make you regret it the next day. Nomad’s sandwich is topped with mayo, shredded lettuce and zucchini pickles, and comes with a hot buffalo sauce, either smothered on the chicken or on the side. For those of you who prefer your food more on the mild side, like myself, I highly recommend getting it on the side.

There’s really not too much to this one. Nomad’s is a bit crustier and drier, while Prettybird’s is fluffier. Both have great chew and are strong enough to stand up to the massive chicken and toppings inside. But I like fluffy.

Sides are offered a la carte at both locations. At Prettybird you have a choice of cider slaw, a seasonal offering, and crinkle cut fries. I went with the fries, since the sandwich already comes with the slaw as a topping. Crinkle cut fries never cease to disappoint, no matter where I try them. I’m sure Prettybird puts a lot of effort into their fries, but whenever I have crinkle cuts I can never quite get over the bad nostalgia associated with sad, soggy elementary school crinkle cuts. Just say no to crinkle cuts. They just aren’t good.

In my not-so-scientific analysis, Nomad wins three of the four categories (although location could go either way depending on your dining preferences).

But look, you can’t go wrong with either of these spots, and they have quickly risen to two of my favorite spots to grab a bite in the city. I will happily recommend each, with a couple caveats. Prettybird: get ready for a line, sometimes they run out, and you have a 50% chance of getting a seat. If you’re with a group of 4 or more, forget about it. Nomad: it’s just a bizarre location, that’s all. But it works. If you’re looking for some super spicy, delicious chicken and aren’t with a larger group, I’d say go with Prettybird. If you’re with a group that may prefer a bit more menu options, go with Nomad. But like I said above, go to both. Make a day of it. Because they’re both fantastic and I’m so glad to see them doing well. 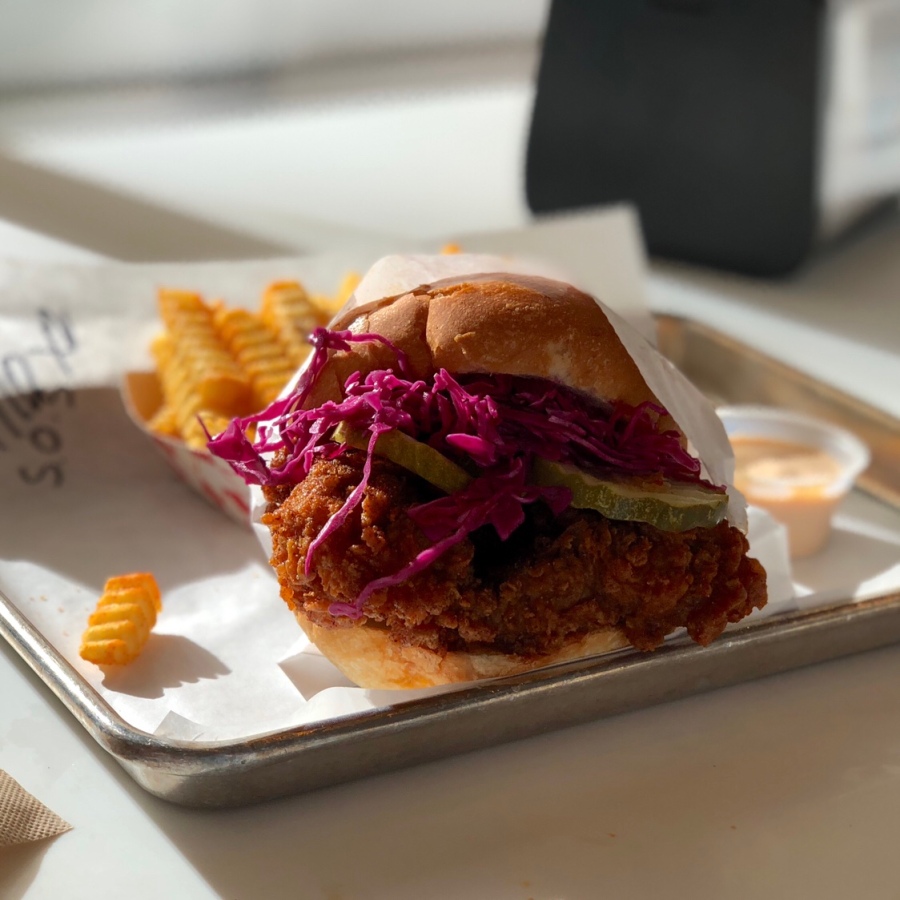 For some reason, RYE has been on my “must try” list for a while now, but it seems like every time we tried to swing by and grab a bite, we hit the few hours of the day they are actually closed: between 2 and 6 pm. But the stars aligned a few weeks ago, and we checked out RYE for the first time.

RYE is in a unique setting: it shares a building with the Urban Lounge, and in fact the restaurant is owned by the same owners as UL. The owners had always wanted a place where they could grab early morning bites and late night food, so when the space next to UL opened up, they snatched it up and opened their own restaurant. Another unique feature is that when you’re enjoying a concert at Urban Lounge and go next door for a drink or some grub, they have TV’s streaming the concert next door so you don’t miss a beat. Pretty great idea.

As you might expect based on the current dining trends in SLC, upon entering RYE you will be greeted by Edison bulbs and plentiful beards–during our visit, I counted 11 dudes and 10 beards. I’ll let you guess which diner can’t grow one didn’t have one. So, while the atmosphere is plentiful in hipsterness, the restaurant is also plentiful in delicious food.

A friend recommended the pickled quail eggs to start, and they were indeed unique. At $3, it’s definitely worth giving them a shot. I love pickled anything, and these were right up my alley, although my wife was not interested in them at all.

For our entrees I went with the shoyu fried chicken with fresh corn grits and pickled peaches. My wife had the RYE burger with roasted jalapeños, caramelized onions, and avocado creme, all sandwiched between a lovely Eva Bakery bun.

Flying in the face of most new restaurants, the serving sizes at RYE are plentiful. The ½ chicken meal was easily enough for two meals. And while I was a bit disappointed in the toughness of the chicken, the breading was deliciously crisp, and the fresh corn grits were perfect. And let’s not talk about the pickled peaches, because they were so good, so in-season, so perfectly balanced between sweet and tart, that I am salivating right now and may need to run down there and get an order if I keep writing about them. So let’s just move on.

The burger was also fantastic. Well cooked, with buns that are hearty enough to withstand the juicy drippings of this fabulous burger. And I loved the fries. Get the burger and you won’t be disappointed.

Service was really good. Attentive, responsive, but not too intrusive. Exactly how it should be.

So there you have it. The kitchen is currently being run by Erik Daniels (formerly of Avenues Bistro and Copper Onion. Erik has gradually added some more American flare to the menu to complement former chef Tommy Nguyen’s emphasis on Asian flavors.

I’d also be remiss to not mention that RYE offers a very solid breakfast/brunch menu as well. I have not had the chance to try it, but look forward to being able to in the near future.

That’s it. I’d give RYE 8 pickled quail eggs out of 10, with a half egg deduction for chicken that was a bit too chewy. Definitely go check it out, and stick around for a show next door as well.