The SLC food scene is on FIRE right now with new openings, new menus and other goodness. Here’s a rundown on the latest.

Feldman’s Deli: after a week-long vacation, the always-delicious Jewish deli is now open, and will begin serving breakfast next week from 8-10:30.

Oak Wood Fire is now open in SLC. One of my favorite restaurants in Draper, Oak Wood Fire has moved into the beleaguered space in the Peery Hotel on 300 S West Temple. The interior has been renovated, and if the menu and service is anything like that offered in Draper, this will be a welcome addition to SLC. I’ve never had a meal there short of outstanding. Their pizzas, fries, and pastas are all top-notch. Open for both lunch and dinner, seven days a week.

Sweet Lake Biscuits and Limeade is open. Sweet Lake is another Farmer’s Market success story, beginning as a small food cart, and now opening their own space at 1700 S 54 W. Their shop is open every day from 7am to 3pm, and offers your basic (but delicious) biscuits and limeade all the way up to The Pokey Joe: a biscuit sandwich featuring pulled pork, coleslaw, mint limeade salsa, and crispy onions.

The Big O Donuts is now open at 171 E 300 S. Big O is a vegan donut shop, open from 8am to 2pm or until sold out. The donuts have been featured at Sugarhouse Coffee for a while, but now they are available at their very own storefront. My dreams of having a 24 hour donut shop in SLC are getting closer to fruition, as Big O opens late nights on some weekends for the bar crowd. At $2.95 each, these dough babies aint cheap, but I look forward to trying their Orange Cardamom, Key Lime, and Lemon Basil flavors.

Trestle Tavern, a new project by Scott Evans of the Pago Group, is opening this Monday, July 18th, in the former Fresco spot at 15th and 15th. The menu will be tavern-influenced, with a nod to Eastern Europe/Bohemia. Liberty Tap House, but with pierogies, chicken paprikash, spaetzle, and borscht? Guess we’ll find out next week!

Amour Cafe opened a few weeks ago. You can check out my post on this hot new space here.

Mollie & Ollie has opened downtown in the old Bayleaf Cafe spot on Main Street, and has been beautifully renovated. M&O features salads, noodle bowls, and grain bowls, and focuses on healthy, organic ingredients. 159 South Main Street. Monday through Saturday 10am to 9pm, Sunday (!!!) 10am to 3pm.

Have you checked out the SLCeats hashtag on IG? If not, you need to–it’s blowing up! Clicky here.

Bonneville Brewery, which recently opened in Tooele, Utah, is having their Grand Opening tomorrow (April 26th) from 4pm until midnight. During this time the brew pub will be giving out free appetizers and other giveaways.

I had the chance to check out Bonneville Brewery last week, and I left impressed. Since I was an invited guest compliments of the brewery, I won’t provide a review, but would like to share some dishes that our dining group got to try.

First of all, the building is impressive. I thought it was a brand new building and was surprised to hear from the restaurant manager that the building was actually an old, sketchy run-down bar before the current owner bought it and completely gutted it and started over. The restaurant is two stories with a giant open space in the middle that gives views up to the bar balcony as well as the two large TV screens on the wall projecting various sports. Downstairs is more restaurant oriented, while the upstairs is the dedicated bar area (21 and older upstairs), but you can get food upstairs as well. I liked the casualness of the upstairs a bit better and think that I will gravitate up there in subsequent visits. While my dining companions tried the beer and enjoyed them, I went with one of the restaurants “mocktails.” I hate that name, but oh well. Jeffrey went with the Spicy Raspberry Lemon Cooler, which was delicious. Raspberries, simple syrup, lemon juice, and ginger beer made the perfectly sweet combination. And it is definitely sweet. I didn’t like mine as much, the Cosmo-Not, which was made with cranberry juice, lime juice, and club soda. It was a bit too tart for my liking (“It’s cranberry and lime, what were you thinking, dummy?” Yeah, I know). We thoroughly enjoyed their appetizers. The Canadian fries (think poutine) were cheesy, salty, rich, and crunchy–everything you want in a dish like this. The friend mac and cheese balls were good, and I particularly enjoyed them with a side of house-made BBQ sauce. Bonneville also does a great job with their wings, and the favorite at the table was the green curry wings. The spicy wings definitely lived up to their name, as I couldn’t taste much for about 5 minutes after trying one. 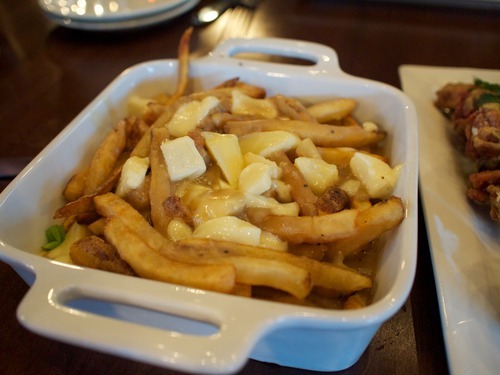 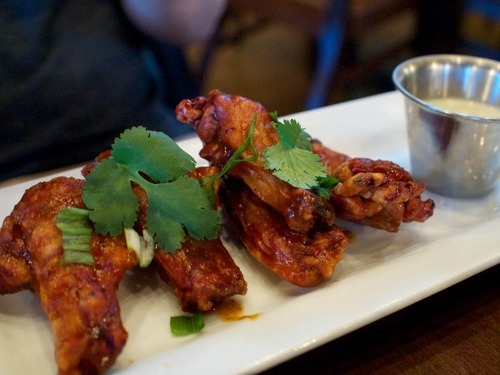 Burgers. This place does burgers, and they do them well. Jeffrey had the pastrami burger, and I tried a bite. We both commented on how the meat actually tasted beefy, which is a really good thing. I had the bizarrely-named “cheesesteak.” I saw it on the menu right next to its corresponding $18 price tag, and couldn’t figure out for the life of me how they make a cheesesteak worth $18. Well, they do it through a bit of trickery. See, it’s not a cheesesteak in traditional sense of the word. This, my friends, is a perfectly-cooked hanger steak that is rested on a pile of caramelized onions and gruyere cheese. No bread in sight. So don’t let the name fool you. It’s worth every bit of the $18. 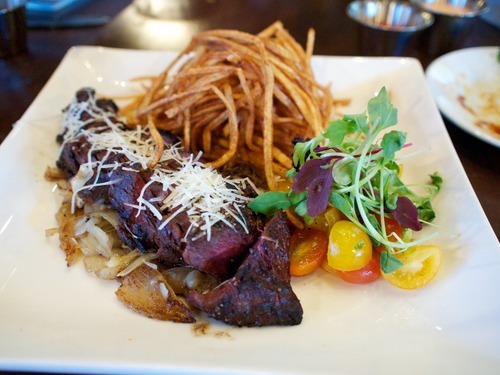 We also tried the pot pie and fish and chips, both of which were cooked well, fresh, and tasty. For dessert we tried the bread pudding, apple pie pizza, and the Pavlova, which is a creamy, merengue dessert topped with various fruit and a raspberry coulis. The Pavlova was a wonderfully light way to end a heavy meal. 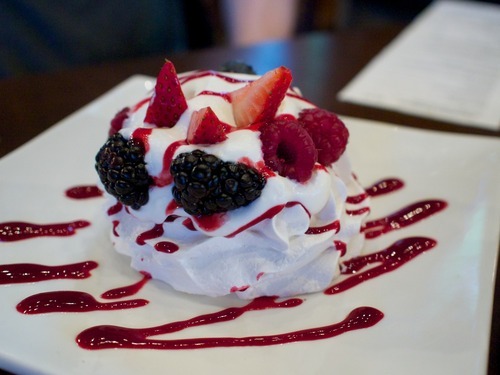 The owner of the brew pub is also the owner of the nearby All Star Lanes, and while the restaurant is new, the brewery has been creating their own libations for the bowling alley for a while now. This has given their brewmaster the opportunity to really dial the brewing process in. 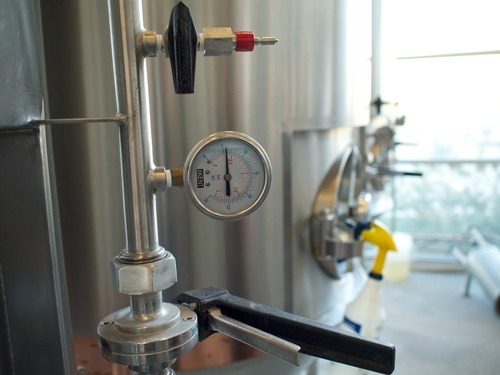 I don’t get out to Tooele very often, but the next time I’m passing through I’ll definitely plan a little extra time to stop by Bonneville Brewery.

Twin brothers Rod and Roger Livingston have competed in numerous national BBQ championships such as Jack Daniels and Sam’s Club, and they have done very well. They’ve decided to open up a new BBQ shop in Salt Lake City at 600 S 300 W. I’ve been a fan of their BBQ for years now, and I highly encourage you to give them a try. They open tomorrow!