Beltex Meats in Salt Lake City is a rarity along the Wasatch Front. In a world where the majority of consumers get their meats from grocery stores who focus more on their profit and loss statements than they do on the provenance of their products they sell, Beltex meats stands alone as a diamond in the rough.

Beltex is a whole animal butchery, which means they utilize every part of the animal in order to promote responsible consumption and minimize waste. The owners of Beltex saw that as residents in the area become more interested in purchasing humanely-raised, sustainable products, existing suppliers weren’t necessarily able to accommodate the demand. So Beltex stepped in to fill the gap, first at farmers’ markets, and now at their own shop. What does humanely raised mean? According to Beltex it means that their animals are pasture raised, with lots of room. Their products are never treated with antibiotics or hormones. They know each of their suppliers personally.

Beltex was founded by a chef, Philip Grubisa, which makes sense when you see that their cases not only feature meat, but also meat pies, charcuterie platters, sandwiches (Saturdays only), sauces, ready-to-cook meals, and other items not typically found in a butcher shop. Philip cut his butchery teeth while working at Spruce in the Waldorf Astoria in Park City, then moving on to open Talisker on Main with Briar Handly. Prior to opening Beltex, Philip trained at the Rocky Mountain Institute of Meat in Denver to certify in professional butchery.

I stopped by on a Saturday morning while the crew was preparing one of their surprising successes: sandwiches. Beltex offered a cuban sandwich one day, and it was so popular, they now offer a rotation of sandwiches on Saturday only. Despite their sandwich success, they limit their production to 50 sandwiches, and once they sell out, they’re out. “We’re not a sandwich shop. We’re a butcher shop that happens to sell a sandwich,” Grubisa says.

Philip has taken care to create a unique space to sell Beltex products. Their shop is located in a renovated house just across the street from Liberty Park on 9th South. Prior to the renovation, this house was a dilapidated mess, and Grubisa hired Brach Design Architecture to update the space to what you see now.

Beltex is open Monday through Saturday, 10am to 6pm.

Click on the photos below to open the gallery. 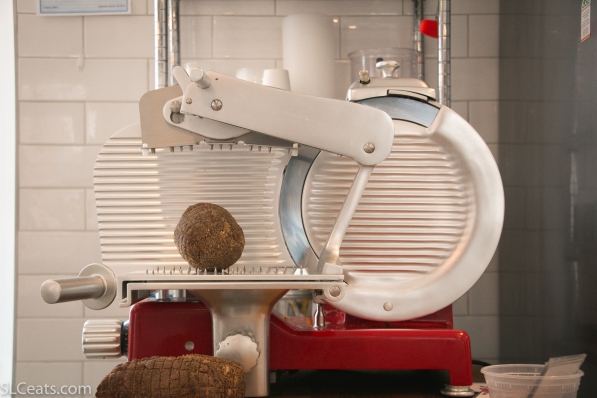 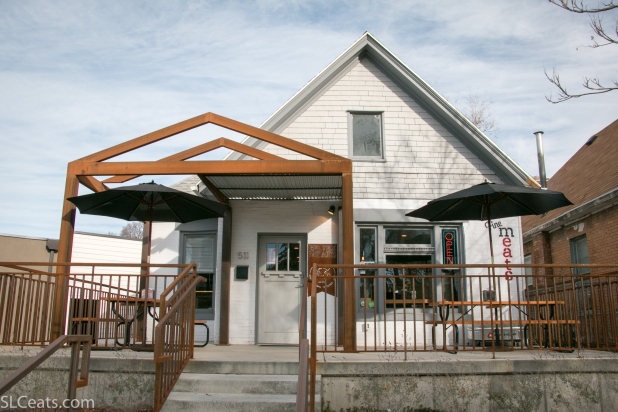 “Siri, set the timer for 19 minutes.” No, this is not an Apple commercial featuring Cookie Monster. I’m at Les Madeleines bakery in downtown Salt Lake, visiting with Romina Rasmussen, owner and chef.

It’s a sleepy Salt Lake Sunday morning, and Romina is experimenting with different yeasts in her croissants, testing and testing again to see if the new stuff yields the same results as her old stuff. Not quite yet, she says. Back to the old stuff for now.

Romina hasn’t always been a baker. She spent her first chunk of post-college years in D.C, then teaching English in Taiwan, and then on to Hong Kong, working in employee communications and then as the speechwriter for AT&T’s CEO. Romina explained that expats hit a point at about year four of being abroad, in which they start to lose touch with their home culture enough that most have to decide at that point to stay or go home. Romina decided to come home, where she worked for another telecom in Miami, before deciding it was time to take a step out of the corporate world and focus on something else. Next stop: the French Culinary Institute in New York.

After graduating the FCI and working as pastry cook at the Mandarin Oriental, her brother called with a proposition. He was the owner of Shaggy’s on State Street, and he had a spot two doors down that would be perfect for a bakery. And so began her next adventure: transitioning from hotel-scale baking to now owning and self-funding her own tiny bakery in downtown Salt Lake.

It started with a rotating menu of baked goods, and then about her croissants from the Trib. But then the Kouign Amann (pronounced “queen amahn”) happened. She was the only employee at the time, baking, running the cash register, etc. So when someone approached her and asked if she had ever made them, she replied that she didn’t have time to experiment. “Well, what if I special-ordered some?” the persistent customer asked. “I guess I’d make some, then” was Romina’s reply. So out went the first special order, and from then on Les Madeleines featured Kouign Amann’s one day per week, which slowly turned into two times, then three, and on until she was making them on a daily basis.

The kouigns were hard to come by, and difficult and time-consuming to make. At first they were in scarce supply and limits to how many one customer could buy. When people came in to buy some, they would “act suspicious, without making eye contact, and would ask for the Kouign Amann.” So the Kouign quickly earned the nickname “crack,” and Romina became “the lady on State Street that sells crack.”

She moved into her new space (the old Urban Bistro space at 216 E 500 S), which had a full kitchen. Romina never intended to offer a full hot menu, but “it would be a shame” to not use the kitchen. About this time, the Food Network called, and featured the Kouign on an episode of “The Best Thing I Ever Ate.” Romina’s phone battery died from the amount of online orders placed the night the show aired. Despite that this episode aired originally in 2009, it is still her most popular product.

But don’t look past her other creations, as her wall of accolades attests to her broad range of baking prowess.

I stopped by and tried her Madmuffin breakfast sandwich without regrets (well, one regret–should have ordered two). Housemade English muffin, boar bacon, eggs, micro chives ensured I got my morning off to the right start.

Ro is humble, and doesn’t feel the need to tout that she makes her own jams from produce she grows herself, or that her gelato doesn’t come pre-mixed in a bag from the factory. She believes that people will see and taste the quality, which is all the touting that she needs. Romina exhibits the entrepreneurial spirit, willing to take risks, jump out of the nest, and do something that others might perceive as risky to pursue her dream. And Salt Lake City is the lucky benefactor of this entrepreneurial spirit. We’re lucky to have her here.