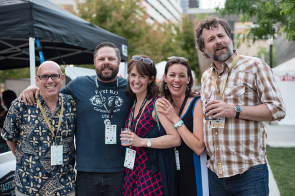 Tastemakers is back for its 7th year, this time at The Gateway in SLC on June 8th and 9th from 5pm to 10pm. This is one of my favorite food events of the year in SLC–food purveyors from across the spectrum (restaurants, chocolatiers, cheese makers) are all in attendance, giving out tastes of their signature dishes.

The VIP pavilion will feature additional food producers as well as plenty of alcohol providers. In addition to wine and craft beers, there will be five signature Tastemakers cocktails available at the event.

The general pass is $30 per person and gives guests access to the venue and tastings from all participating restaurants. Alcohol is not included, but can be purchased on site. The VIP pass is $85 per person and includes access to the VIP pavilion, exclusive VIP tastings and a five-drink passes. Tickets are now on sale at tastemakersutah.com.

Guests receive a Tastemakers Passport, to be stamped after each sampling. The Passports are valid for both nights of the event and are later redeemable for exclusive discounts and coupons at participating restaurants throughout the summer. Instructions and a stroll area map will be available online and on the Tastemakers mobile site.

A portion of all proceeds will benefit Head Start Utah, a program that promotes school readiness for young children from low-income families.